My Thoughts on the 2008 Presidential Election

I have no numbers to support this, it is just my thoughts and what I see as a probable situation form a Washington outsiders point of view.
If Hillary Clinton will actually admit to the fact that she is going to run, we could end up with the most interesting election ever, but the White House will remain firmly in the grasp of the GOP. For if she runs and wins the Democratic nomination, the Republican party will have to answer with a candidate who can outwit her strategists. Hillary's biggest assest is her ability to capture the female vote. Being a woman, this increases the odds she will win this segment, and therefore, as the female vote weighs heavily on the outcome, she could win because of this issue alone if not properly challanged. Therefore, I beleive the strongest candidate for the Republican party to run is Condeleeza Rice. She, as well, needs to admit her presidential asperations, because everyone knows she has them. This is the smart candidate to run. We are in the middle of a war. People are looking for stability, and someone from this current administration is the best to represent this. Now Bush can't run again, no one will ever vote for Cheney, and a large portion of the rest of the administration is engulfed in scandal. Now, if Jeb decides to run, he has the legacy thing going for him, but I see him more in the VP slot if he is really serious. Back to Condy; with her in the field, you automatically take away the female vote going to one candidate. Also, with Rice being an African American woman, she pulls votes that traditionally would go democratic from the African American voting pool. Hillary could counter by naming rising star Obama as here VP, thereby recapturing some of this voting pool, but he is still a little green when it comes to time spent in Washington. If all this happens, I see the presidency going to Rice. Although Hillary is in the news all the time and has the media exposure more than Rice, who only gets it when on official business, the country is leaning to a more conservative stance (I am happy to reside in liberal California) and the Republican party is the poster child for the Conservatives. Although I have no idea how this happened. I believe we need to change party names from Democratic and Republican to liberal, moderate, and conservative. The original arguement between the parties was federal versus local government. And although this is still an issue that comes up in their platform for social welfare programs and taxes, it seems to be less about the type of govenment and more about who's values represent the ideals of their constituents.
Any who, if I had my way, I would live in a world where government was run as it was on the west wing, so my vote goes to: 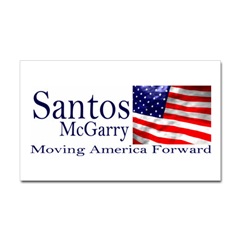 Posted by shortKort at 2:01 PM