In honor of my favorite grammarian...

Email ThisBlogThis!Share to TwitterShare to FacebookShare to Pinterest
Labels: ramblings

Makes sense to me! 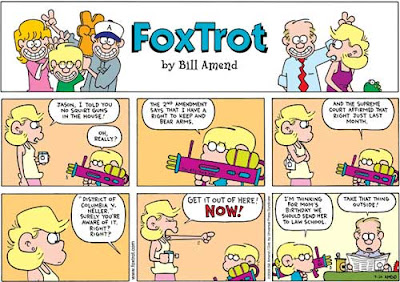 Posted by shortKort at 8:44 AM No comments:

Email ThisBlogThis!Share to TwitterShare to FacebookShare to Pinterest
Labels: comics

It seems to be the trend these days that if a concept works in one medium, it will work just as well in another; and this is an ever present reality in the world of the movie musical. However this is a unique area, as it moves in both direction, possibly multiple times, over the years with the ebbs and flows of pop culture and fandom. The most recent creation to grab hold is the film that opened yesterday, Mamma Mia!
Now, I did not watch a copy I found streaming on the internets early in the week, due to the fact it opened the same weekend as The Dark Knight (and it being the weekend before finals, having time only to see one of them over the weekend), at home lounging in my fabulous IKEA chair. However, if I had, It would definitely tint my view of the success one way or another, wouldn't it. Doing so would deprive the movie of the surround sound and the amazingness of seeing the vibrant sets on the jumbo-tron; but, it would allow me to sing along with the ABBA songs that have been woven into a storyline.
What is the storyline, you ask? You mean you do not know...well, girl meets boy and wants to get married in a big production with her father giving her away, however, her mother won't tell her who her father is, so she steals her mothers diary and discovers her mother was a whore, giving her 3 possible fathers. Being the MENSA candidate she is, she invites all 3 to her wedding, determined that she will know him at first sight (ah, the hope of youth that law school has beat out of me with wet reeds). And as you can tell, this is not heading in a positive direction for a quick resolution and telling you the rest would give away the fun part of the story:)
Anywho, on stage it was good, I enjoy the music of ABBA and having large dance numbers to go with it makes it even better. In movie form, it does translate, you get bigger better sets and more intricate dance numbers that you can have a birds-eye view of. The actors acted, but the actors are not singers, and here is my dilemma with the genre in general. In the time of the classic, to act you had to be the triple threat, be the best actor, dancer, and singer. Nowadays, if you are hot enough, they with have a computer synthesize your talent if they want. I am not saying that these were not talented people, quite the opposite. This cast pulled together some of the most talented actors and actresses out there. As hard as he may try, Pierce Brosnan could not pull off Sam, and that may be less of the fact of the acting and more the fault that he is who he is and having James Bond play Sam was just odd. But overall, extremely enjoyable matinee fun, but is even more enjoyable if you are watching during a thunderstorm in you jammies singing along at the top of your lungs...
Now that Mamma Mia has emerged a victorious stage to screen jumper, studios are clamoring to get more stage musicals to the silver screen, and that means a Wicked movie musical. And this is where I pause and wonder if we have taken the genre past the point of no return. When I read Wicked, I enjoyed the dark, gritty writing and immediately thought this would be a fabulous movie, then, they made it into a stage musical...they made it safe and puffy and basically scrubbed and polished the plot to sell it to the masses. And the show itself is fabulous, following the skeleton plot they left intact, mainly the characters names and location, with a soundtrack that is way too catchy. But how will they make this into a movie. If they introduce more of what the book originally laid out, they could create a visually stunning masterpiece (even if they let George Lucas CGI in some flying monkeys), examining the sides of the characters they decided were too dark for Broadway. But if their goal is to keep the songs and audience they have, this is not really an option.
Solution 1: make 2 musicals, have Tim Burton translate from the book and have Adam Shankman translate from the musical.
Solution 2: don't do it! Learn from the mistakes of the past, RENT did not work as a movie, this may not either.
But, alas, it will be made. It may or may not ruin the original, whether that be the book or the stage production. For Hollywood studios are a society unto themselves, cutoff from the outside world by the 5, the 405, and the 101. They will do what works, over and over again, because they know every couple of years a new generation see Annie, or Cats, or now HSM3, and they realize that people can sing and dance at the same time and they want more. And, truthfully, the movie makes the "great white way" a more accessible destination for all. I just ask you to consider one thing, the fact that musicals can make great movies, but not all movies can make great musicals [Spiderman!]

And for a taste of HSM3 for those not in the know...

Posted by shortKort at 9:36 AM No comments:

Everyone remembers Doogie, right? Genius teenager, works with his dad in the hospital, wore hightops, created the first blog, was bffs with the kid who played Racetrack Higgins in Newsies (which he was in with Christian Bale, who played Batman in the movie I saw this morning, which told the story of the scariest Joker ever, which is why I am posting this in the middle of the night surrounded by my posse of vicious stuffed animals)...
Doogie Howser was my first celebrity crush, and, quite possibly, my first crush, and still, years later, when he came out, I was crushed; I was crushed that I never stood a chance. I am not sure what drew me to Doogie, over, lets say, Joey McIntyre...I believe it was the nerd factor we shared. I got what he was going through, he would have gotten what I was going through. Maybe I idolized him for doing what they would not let me do at the moment, be a doctor (not play, but do, treat, make people better) for that was my plan for pretty much forever until that pesky trypanophobia reared its ugly head. However, maybe I just thought his blond hair, goofy smile, and acid wash jeans made him dreamy...
Back to my point...
If NPH ends up in something, at any point, there is a good chance I will enjoy it.
For instance, Doogie Howser is one of my all time fav shows, I even have the box set (although I believe my parents are currently holding it hostage with my West Wing seasons until, you know, I finish this studying thing). Further, he was in, however short the stint, Rent, and that was the first stage musical that I really dug after the obligatory Annie, Cats, Les Mis, and Grease. And currently he is involved in 2 things I enjoy, one being Barney on "How I Met Your Mother" and the other being the character of Dr. Horrible singing about his yearning for a girl he is loosing to the jackass who keeps Dr. Horrible in line on Dr. Horrible's Sing-A-Long blog.
So, here's to you Doogie, for everything you touch turns into sunshine and daisies and with your angelic voice, you lift my heart up through the clouds.
And on that note, I end my day writing a post, because that's what Doogie would have done...
Posted by shortKort at 10:50 PM No comments:

Where did the Good Things go?

First, you publish the most awesome magazine that I have been able to purchase in the US, then you create a blog that has daily posts by your mag editors that are actual blog items I enjoy reading and further investigating the items you post about....and finally Martha, you tear it away from me! You cancel Blueprint, but you keep Bluelines up, and that sustained me, even throughout my deep disappointment caused by the loss of my new favorite publication, no matter how short it was available in my life. Then, Martha, you start by replacing the Bluelines blog editors...now, I know that the original staff also worked at your now defunct magazine and most likely went on to bigger and better magazine jobs after being kicked to the curb, but the individuals keeping the blog rolling, number 1, failed to post anything as intriguing as the original group (you can only have so many posts about some artist's collection of antique plates), and number 2, did not post all that frequently...and now, I read a post that Bluelines is no longer being published.
I know there were obvious problems with the Blueprint publication...starting and stopping feature series, no real set number of issues published per year, novice photoshop users in your graphics department (yea, I noticed your lack of expertise at layering images, may I suggest Photoshop for Dummies?). And as much as the subsequent bloggers at Bluelines differed form the original group, they hit the mark every once in a while and that brought warmth to my heart when I read those entries.
I am left to ponder what will become of the market segment you have so carelessly thrown by the wayside?
They are too young to be subscribers to your major publication, too employed to have the time to watch your show, too flush with cash to care that you have a line at K-Mart, and too driven to wait for you to come back to them...
As your core audience nears an age where scrimping on luxuries like magazine subscriptions becomes necessary because of reliance on a limited income and with the country heading into a recession, MSLO, I ask you, did you decide that my age bracket was not a beneficial target audience for you to retain?
At least this bad business decision won't land you in prison...
Posted by shortKort at 11:53 AM No comments:

Why can't we be taught by ninjas?

Posted by shortKort at 2:51 PM No comments:

Email ThisBlogThis!Share to TwitterShare to FacebookShare to Pinterest
Labels: reader item of the day

What occurs when I have a 5 day weekend...

After a night of drinking and debauchery (or West Wing and beer) I settle into a routine of studying and such. However, my concern is how to do so most efficiently. I contemplate a trip to the library to outline in the solitude of it's "inner sanctum", which is just really, well, not the lobby. On the other hand, there is also the draw to Starbucks (until they close it) or Borders. Unfortunately, due to a recent trip to Borders, I would most like to say toodaloo to all my Pro Rep and take one of my new books up to the roof to read in the sun. But, alas, my responsible side will win out and somehow, that makes me feel somewhat defeated...
Posted by shortKort at 7:34 AM No comments: