Not to brag, but I'm in SoCal and you are buried under a foot of snow!

Just a quick post before I head a little bit north to Santa Barbara and then San Francisco...

First, I want to thank the Harrisburg Airport for letting my plane be the only one to take off.  Thank you!

Second, I would like to thank United and O'Hare.  United and O'Hare, I am so glad that I was given the opportunity to both get in my workout in and see the entire O'Hare airport by putting the gates I get off at and I pick up my connection at on opposite ends of your airport.  Also, the hour we spent in the "penalty box" on the runway causing me to have to sprint the entire airport to get to the gate seconds before they closed the door, brilliant!  United, I want to thank you for my flightmates, the UCLA mens basketball team; I have never felt shorter.  And UCLA, I mean they are my FAVORITE!! To sit on a plane with them for 5 hours, that was the top of my Chrismukkah list this year.  Also, thanks for the 3am phone call that my luggage made it to LAX and would be delivered around noon the next day, I was waiting up with baited breath for that one...

Thirdly, I want to thank California.  It is December.  I packed for December (that's not December, East Coast, mind you). This is what I was welcomed with last night at 5pm: 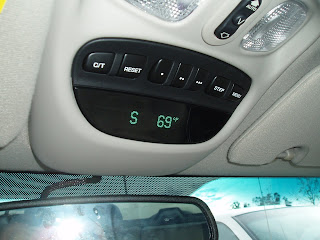 I did not pack for this weather, namely, I misguidedly assumed that shorts were not something I needed to bring with me this trip.  My bad, SoCal, I forgot about the whole global warming changing the entire year to short weather thing.  Also, I realize I have been away so long my blood has begun to thicken, so I don't need a parka at 70F anymore.

But, on a more positive note, I have Coffee Bean! 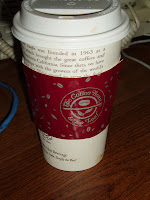 More precisely, I am on my third Coffee Bean Dream Tea Soy Latte, which smells like Christmas potpourri and tastes kinda like a Snickerdoodle.  This one here I have named Marvin after my driver cover that is a Marvin the Martian head (they didn't make K-9 ones :( ) who was bopping along next to me on my little golf outing this morning; which is to say, I am in a lot of pain at the moment (and the new owner of an awesome blood blister) and driving for an hour or so must wait, hence the blogging.


[Also the car I am driving does not have running boards and, due to my vertical impairment, the flying leap I must take to enter the vehicle is so not happening!]
Posted by shortKort at 10:23 AM

Email ThisBlogThis!Share to TwitterShare to FacebookShare to Pinterest
Labels: california